In one of those strange coincidences that make you blabber incoherently about the nature of the universe and things like that, I was watching ‘Prem Pujari‘ one evening, and later at night I read Sue Townsend in ‘The True Confessions of Adrian Albert Mole, Margaret Hilda Roberts and Susan Lilian Townsend’,

“When I told my second son that I was going to Russia he narrowed his eyes and said, ‘Again?’ He went off on some mysterious late-adolescent errand and on his return said, ‘After you’re dead I won’t be surprised to be told that you weren’t really a writer, you were a spy.’ This made me laugh quite a lot. Spying, as a profession, seems to me about as interesting and useful as designing horse blankets for ‘My Little Pony‘. In my ideal world there would be an annual spies’ convention held in a hotel. Secrets would be swapped openly in the lobbies and bars; so much more comfortable than hanging around on street corners; cheaper too in the long run.”

Sue Townsend would have approved of the spies in ‘Prem Pujari’, who definitely do not hang around street corners, but meet in lobbies and bars over a lot of dancing, most of it for some reason, involving the belly. 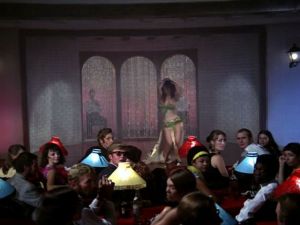 And a lot of blue eyes. 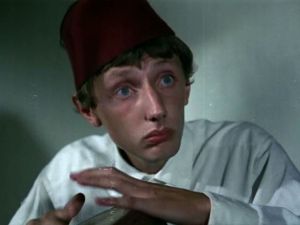 It all does seem a lot of too-dah about nothing, because mostly what happens is (Rani) Zaheeda and (Ram) Dev Anand hop from one country to another in various disguises. They run on the streets when no one is chasing them, they look around suspiciously at poor ‘foreigners’ who only seem mildly curious about their antics.  ‘Operation Europe’ is coded in Chinese 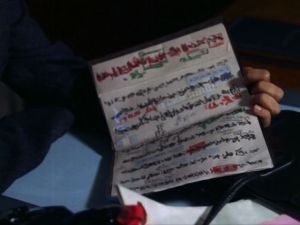 and has many characters masterminded by Chang-saab, (Madan Puri) 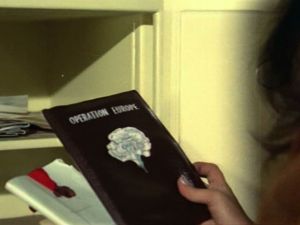 but since everyone seems to know everyone else, the exercise in throwing white carnations at each other seems pretty pointless, but whatever. 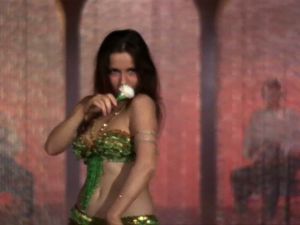 Dev Anand does have some good disguises though as Yik Tok 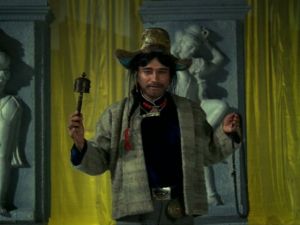 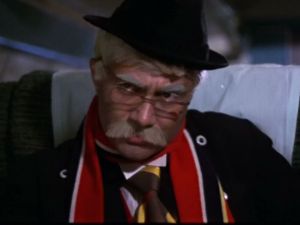 Before he becomes a spy, he is Ramdev Bakshi, a peace-loving soul who would rather catch butterflies than serve in the army. 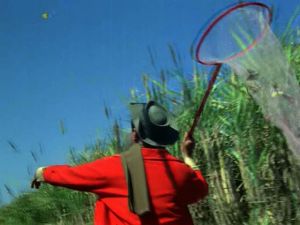 He also has a beautiful sweetheart Suman (Waheeda Rehman) 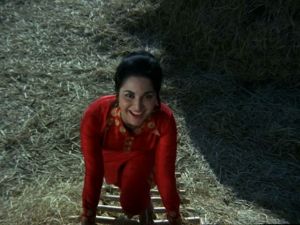 and they look very, very good together. 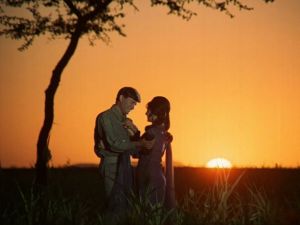 But he has that very filmi father, a retired army man, crippled in service, Subedar Bakshi (Nasir Husain) who insists he go back to duty where an Indian dog is killed on the China border because he teases the Chinese by showing them his butt. 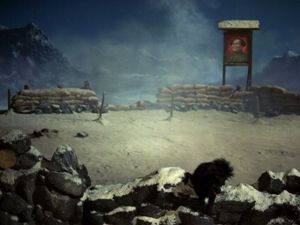 Ramdev Bakshi refuses to fight the Chinese back and is court-martialed. He is sentenced to 2 years jail but escapes.

Ram shows us his sensitive side when he cries.

The song is detailed quite lovingly, with the relaxed laughter on Nasir Husain’s face at the end of the song, happy to be with his regiment, the old soldiers and the enameled tin mugs. 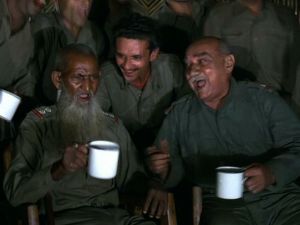 But then Dev-saab shows us his less sensitive side as a director when he zooms into Zaheeda’s bra strap as an introductory shot after a helicopter crash.

If the bra strap was meant to make us believe that Zaheeda is a hot, sexy babe, it fails miserably, because sadly she is a clumsy actress. 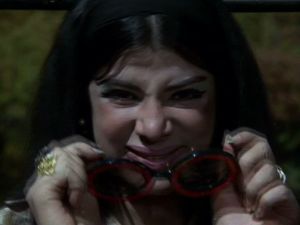 The spies watching her do a strip tease show which is her first act on landing in Europe seem to think so too. 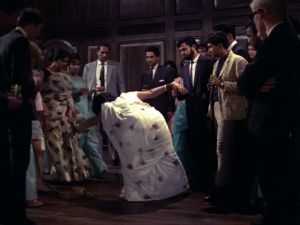 The girls are deliberately framed like that, with Zaheeda actually throwing up her skirt and showing us her bottom. 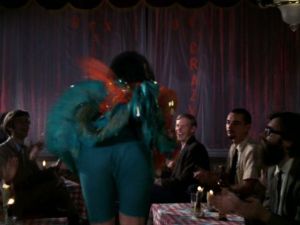 But I think the shot of his own backside is inadvertent. 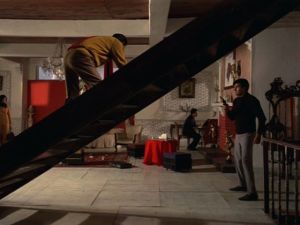 Everyone smokes a lot, the patriots 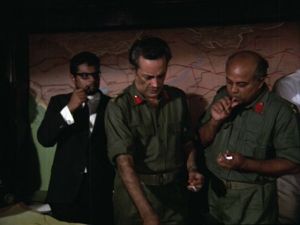 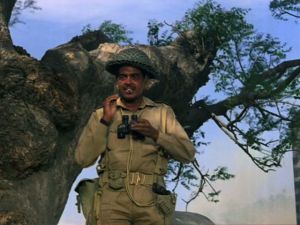 And if Ms. Townsend were still dissatisfied, there are some more handsome men, 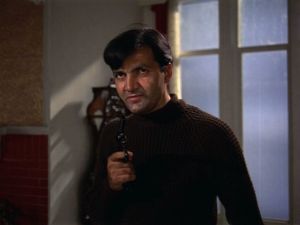 including on the BBC. 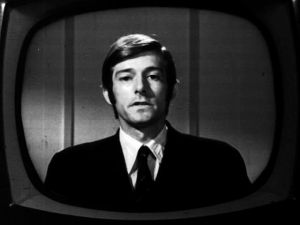 Around this frame, there is the noise of crows, traffic, horns, a drill machine, the rumble of a bus. There is the fishy stink that passes through the house with every gust of breeze. Within the frame, there is this. #sea #calm #window
It seems a good day to reassess what MUMU SHELLEY has been up to since its completion in September 2021.
So thrilled to receive this message from one of the loveliest artistic directors, Chris Clark, awesome in his attention to detail and his respect for filmmakers. -
An independent film like Mumu Shelley is usually mostly DIY. It comes together only because there are enough people out there, who love the chaos, the struggle, the madness of making an indie film. Who will pitch in with whatever they have, their time, their talent, their equipment, for little or no money or big visibility, but simply because it is fun to once in a while, work on something that is not governed by the market. Making an indie film is a huge gesture of privilege, the privilege of having a little bit of money to invest, a lot of time on one’s hands, and incredible friends and family.
If you must sneak in a last film at Beyond Borders: A Feminist Film Festival, before it ends tonight, 19 Dec at 11 pm, do watch the short Nepali fiction, SANKUL (The Confusion) by Aashuka Aryal here - https://doculive.blogspot.com/p/confusion.html. The confusion of a newly married girl about her sexuality comes through her silence. The cluttered frames of a small house hint at the suffocation the young woman suddenly realises her life is going to be. Superbly cast.
During the last weekend of Beyond Borders: Feminist Film Festival on until tomorrow, 19 Dec 11 pm, don’t miss the chance to see Ek Tha Gaon, a documentary by Shristi Lakhera here - https://doculive.blogspot.com/p/ek-tha-gaon.html
Watching Pakistani shows is my not-so-guilty pleasure. But as seductive as the language, the sets, the faces might be, the patriarchy and feudalism in real life is not as benign as it might be easy to believe in a ‘drama’. Three ultra-short films from Pakistan are a glimpse into the country that is just like ours, but not ours.
I have always had a soft spot for rebel girls. If you do too, watch Priya Thuvaserry’s CITY GIRLS (Documentary/28’) at Beyond Borders: A Feminist Film Festival here - https://doculive.blogspot.com/p/city-girls.html
David Raphael Israel writes of MUMU SHELLEY - "From the opening scene (in English) of a young woman wearing fancy shoes & speaking into a mobile & apparently about to join a swank party or the like, clearly it's a contemporary story in uppercrust urban India -- but I haven't watched more to find out more, just yet. But I found the scene so striking & interesting & engaging -- the fact of not knowing yet the context is actually part of its interest". And his 280 word review below in the pictures. You can watch the film at Beyond Borders: Feminist Film Festival here - https://doculive.blogspot.com/p/mumu-shelley.html (also link in bio)
My Tweets
BatulMukhtiar@Mastodon