So while Dhanno and I are having a what seems to us desi types bred on Dominoes and Pizza Hut, an authentic Pizza Prosciutto e Funghi at Cafe Concerto by the Lakeside in Pokhara and Teja has been saddled with a spinach ravioli with ricotta cheese which he is trying hard to like for our sakes, he sighs happily and says, “We should do this every year.”

“How much money do we need to go abroad every year?”, he asks me, since I’m the treasurer and accountant of all our monies.

Teja says: “Yes, I suppose we can. How many days in Europe can we do in that much money?”

He says, “But I don’t want you worrying about money all the time. I can keep the accounts.”

Dhanno goggle-eyed whispers, “Mama, no, don’t let him do that. He’ll never keep a hisaab, and that will make me more tense.”

Teja laughs, “What is with this hisaab? Look, we just take the money, and have fun till we spend it. We may have to budget our meals a little, of course, eat at fancy places like this, a little less.”

Dhanno retorts, “I think if you budget your beer and cigarettes, we can eat where we like.”

Teja laughs, “No, I’m not going to do that. What we’ll do is just have a bigger budget. Or go for a holiday in India.”

OK, so I keep accounts like a munshi. I even have excel sheets of holiday expenses. Teja thinks I am mad. I say, well, I can look them up and tell anyone how much things are going to cost when they want to go somewhere. What he doesn’t realize is that the numbers comfort me. First  of all I cannot remember trivial details. So if I have written down when we have paid the service bill for the water filter, I can just look it up and not go glass-eyed when faced with the question of whether I am meant to pay the water filter repairman or not. And I can file our tax returns fairly easily as everything is written down and organized into categories. I have worked out a system over the years, and I keep tweaking it to make the year ending easier and easier for me. It also helps me in my work, I can budget for films in a day.

I look at old account books and they are like delving back into old diaries. Oh, we saw that film that time, we had dinner there, we stayed there, we bought that bag, those shoes, that book. In our paper conserving family, I still have an accounts register book, the typical red covered pothi, that belonged to my father from a business he ran before I was born. When I look at it and see his handwriting, quite similar to mine, I can see him as a young man, with his ambitions and dreams, trying to set up on his own.

As we grow older, the numbers in old accounts books seem smaller and smaller. The one thing I find absurd however is saying, “When we were young, we used to get chocolates for 1 rupee and now even a beggar won’t accept a rupee.” It’s like saying, I used to be so thin when I was young, or had such thick hair. The thing is, today I am not thin, and nor do I have thick hair, and I’m doubtful about giving a rupee even to a beggar. But even so, it’s nice to look at old photos sometimes and seeing how thin you really were, and how thick your hair really was.

And even though I had difficulty walking on the Annapurna Base Camp trek, I liked noting down the heights of where we had reached, and how many hours it had taken us to get from one place to another. It’s the first thing I did when we sat down.

Every guest house had a trekking information board up, with a map and distances in hours. And though the numbers did not always match, and certainly never with our own timings, the maps were a pleasure to look at. So here are some for you, shot by Teja. 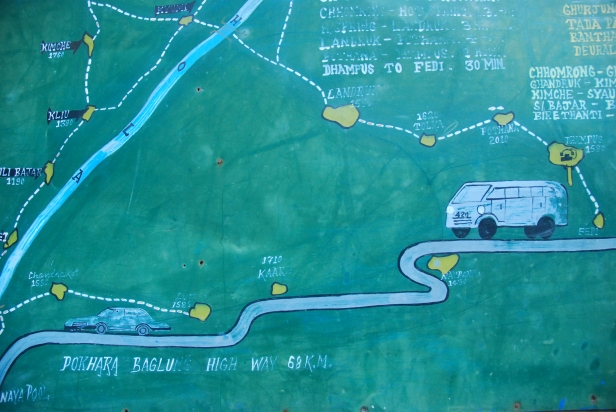 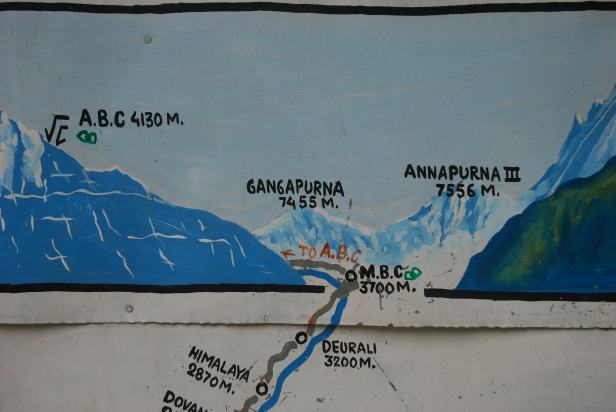 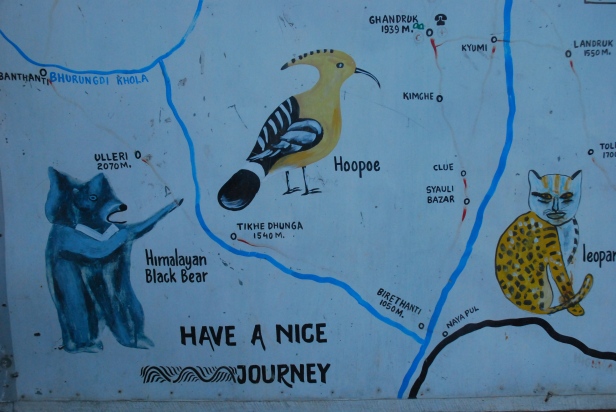 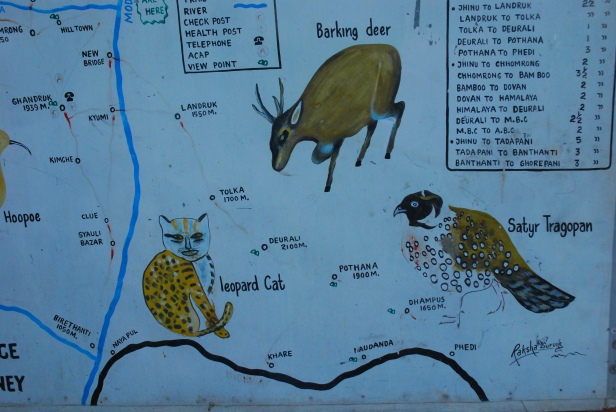 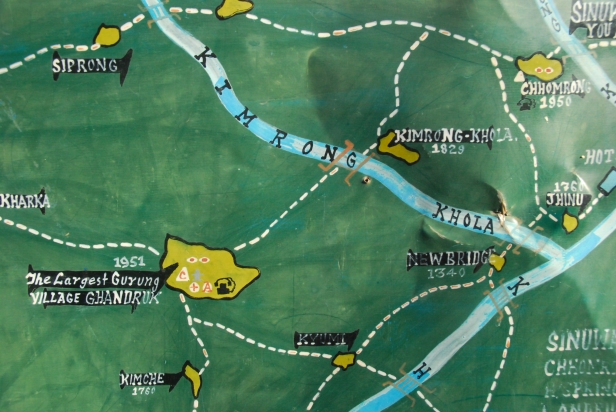 30 thoughts on “i am not quite kanhaiyalal but ..”

Gorgeous, gorgeous Liberty Cinema. And fabulous KASHISH Mumbai International Queer Film Festival, India. For a brief moment in time, a space of absolute acceptance and freedom. I am beyond proud in this month of Pride, that MUMU SHELLEY is playing today at KASHISH, Liberty Cinema, 5.45 pm along with many more amazing films. Come, come. KASHISH is on until June 5, 2022. It's also online. #MumuShelley #KASHISH2022  #FlightsForFreedom  #LetsRockTheCity @KASHISHfilmfest @aimanbmukhtiar @pubalisanyal @vivekwhy @iamaasifpathan @anandnmbr @mahak_gupta_ @richa_09_ @ruby_makeupandhair @the_lipstick_gypsy
Around this frame, there is the noise of crows, traffic, horns, a drill machine, the rumble of a bus. There is the fishy stink that passes through the house with every gust of breeze. Within the frame, there is this. #sea #calm #window
It seems a good day to reassess what MUMU SHELLEY has been up to since its completion in September 2021.
So thrilled to receive this message from one of the loveliest artistic directors, Chris Clark, awesome in his attention to detail and his respect for filmmakers. -
An independent film like Mumu Shelley is usually mostly DIY. It comes together only because there are enough people out there, who love the chaos, the struggle, the madness of making an indie film. Who will pitch in with whatever they have, their time, their talent, their equipment, for little or no money or big visibility, but simply because it is fun to once in a while, work on something that is not governed by the market. Making an indie film is a huge gesture of privilege, the privilege of having a little bit of money to invest, a lot of time on one’s hands, and incredible friends and family.
If you must sneak in a last film at Beyond Borders: A Feminist Film Festival, before it ends tonight, 19 Dec at 11 pm, do watch the short Nepali fiction, SANKUL (The Confusion) by Aashuka Aryal here - https://doculive.blogspot.com/p/confusion.html. The confusion of a newly married girl about her sexuality comes through her silence. The cluttered frames of a small house hint at the suffocation the young woman suddenly realises her life is going to be. Superbly cast.
During the last weekend of Beyond Borders: Feminist Film Festival on until tomorrow, 19 Dec 11 pm, don’t miss the chance to see Ek Tha Gaon, a documentary by Shristi Lakhera here - https://doculive.blogspot.com/p/ek-tha-gaon.html
Watching Pakistani shows is my not-so-guilty pleasure. But as seductive as the language, the sets, the faces might be, the patriarchy and feudalism in real life is not as benign as it might be easy to believe in a ‘drama’. Three ultra-short films from Pakistan are a glimpse into the country that is just like ours, but not ours.
I have always had a soft spot for rebel girls. If you do too, watch Priya Thuvaserry’s CITY GIRLS (Documentary/28’) at Beyond Borders: A Feminist Film Festival here - https://doculive.blogspot.com/p/city-girls.html
My Tweets
BatulMukhtiar@Mastodon

Follow banno, dhanno and teja in bumm-bumm-bhole-land on WordPress.com
Join 616 other followers

Join 616 other followers
Follow banno, dhanno and teja in bumm-bumm-bhole-land on WordPress.com