When we entered junior college in the 80s, we were all 15, 16. Most of us had come from all-girls or all-boys schools. And for most of us, junior college was the first collision with the opposite sex apart from our families, extended families and neighbors.

Poona in the 80s was a small town, divided firmly into two. The Deccan area was more traditionally Maharashtrian, the Cantonment or Camp area as it was popularly called, was cosmopolitan with its army background and its mix of communities, which included Parsis, Christians, Muslims, Iranians and Sindhis. Colleges in Deccan were more conservative, the ones in Camp were more ‘free’ and therefore also looked at suspiciously. Wadia College was where students went to have fun, not study.

Some girls came from families where boys were not frowned upon, some could not even get phone calls from a boy at home. However, in college or in town, mixed groups of boys and girls were tolerated as normal, but not so normal if a girl and a boy were seen alone. In the bid to forge special relationships with girls which would allow them certain more privileges than to one of the gang, boys would often request girls to become their sisters.

Brothers took their roles seriously. They not only had the right to scold a sister if she was stepping out of line, but also considered themselves protectors, and would take up fights with any boy who was seen to be invading their ‘territory’. Girls too took pleasure in the relationship, and would admonish their brothers if they smoked, or didn’t attend classes. When ‘Raksha Bandhan’ came around, boys with the most number of rakhis on their wrists had a smug, meant-to-be noble look on their faces.

Perhaps it was because I was the oldest child, and my only brother 8 years younger than me, I did not crave for brothers, and did not welcome their protection. Particularly after a few ‘brotherly’ proposals converted themselves into romantic propositions in a few weeks’ time. Since then, I have known several ‘brother-sister’ relationships turning into ‘husband-wife’ ones.

My first boyfriend in college had many sisters, some of them my own best friends, and he usually took my help in getting them gifts. It used to annoy me a lot since he never seemed to think I needed a gift. Years after we have broken up and moved on, he is still ‘brother’ to my friends, so I guess, there is something to be said for the bond. A sister is for life, a girlfriend, once she becomes an ex, is more tricky to assimilate into one’s life. And they still get gifts from him, by the way.

However Dhanno has studied in a co-ed school since the beginning. Except for a few rakhis tied during ‘Raksha Bandhan’ as part of school festivities, I don’t remember any requests to be sister coming her way, or her friends’ way, from their classmates. These children are friends with whoever they want. And they’ve been exchanging romantic propositions with each other since they were 8.

‘Aaya Saawan Jhoom Ke‘ has many threads of melodrama weaved into it – there’s a lost mother and son, a rape and a murder, an accidental death and bitterness, adultery and betrayal, a pre-marital pregnancy, but more than anything else it is about Dharmendra as a noble brother, ready to sacrifice his own happiness, even when his own sister does not trust him, when all the people he loves give up on him. Strangely enough, the film does not have a single brother-sister rakhi song.

What it does have is a very, very handsome Dharmendra, favouring camel yellow and browns in a lot of his clothes and a gorgeous Asha Parekh.

Bindu plays Dharmendra’s sister, loving, innocent, married to a rake. I am very disappointed. She is not a jackal in sheep’s clothing, but a lioness dressed up as a sheep. 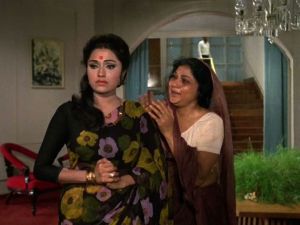 Her younger version is spunkier, calling her brother a ‘langoor’ and refusing to tie a rakhi to him.

Aruna Irani too plays a demure, rather sad younger sister to Asha Parekh, but because here she is very young, she does not jar even with her dimples firmly in control.

She does have a romp on the beach with Jalal Agha. I would like the address of the beach in India where girls can go swimming in their swimsuits and cuddle up to their boyfriends, as well.

Dharmendra offers to play her brother too, and in that moment, I feel that perhaps it would be safer, nicer to have Dharmendra as a brother, and not risk having him break your heart, that is still beating wildly after seeing him in a pink kurta in the title song ‘Aaya Saawan Jhoom Ke’. 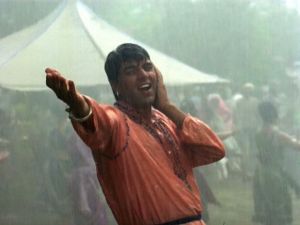 Lakshmi Chhaya gets to be the bad girl, with a big red gold wig and tight, tight clothes. 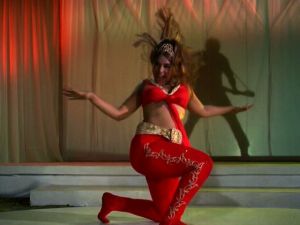 The wig reminded me of the dolls we would be brought from abroad, once or twice in our childhood if we were lucky, with their straight nylon hair. This was before the ‘Barbie’ days, and the dolls were precious, and remained packed in their boxes while we were growing up.

This Raghunath Jhalani film also released in 1969. Don’t ask me why but my video rental person in Bangalore who is kindly giving me a week’s quota in one go, (which sees me through 3 weeks, by the way, lest anyone think I am not working enough), considering I live way beyond city limits, seems to have sent me all 1969 films this time. I am not complaining though because the 60s films are full of the prettiest clothes, beautiful hair ornaments and fabulous sets.

The costumes are credited to Padma Rani, who as an actress could break into a mean dance herself. Here she is with Asha Parekh in ‘Kanyaadan‘

And we shall leave with Nasir Husain clutching his heart yet again, though it seems to have dropped a little with grief. 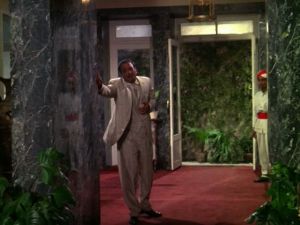