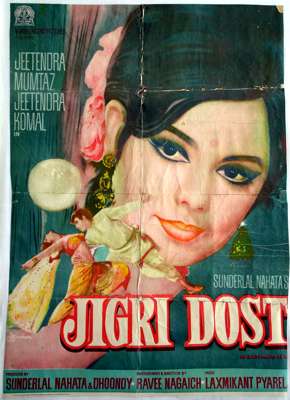 In ‘Tamanna’ I liked the suhag-raat scene between Biswajit and Mala Sinha. 2 glasses full of milk, the glasses painted with orange flowers, I remember similar ones from childhood, 2 pillows side by side, one embroidered with ‘Good Luck’ and the other with ‘Welcome’, cut to 2 empty glasses. Cut to next morning, and 2 heads, asleep on the pillows. Beautifully understated.

In ‘Do Dil’, I liked the scene between Biswajit and his foster uncle, the pujari of the village who has brought him up after the death of his parents, when Biswajit is being forced to go to the palace and reclaim his throne. Biswajit’s agony at losing his freedom, his friends, the village he has grown up in, is very touching and makes me like him for the rest of the film. He plays a really conscientious prince, someone who knows what it is like to be poor. Also, Rajeshwari is gorgeous as a tribal girl, she has the boldness of the Maharashtrian girl in her movements and her speech.

In ‘Jigri Dost’, I could have watched Jeetendra run and run forever. Watching him run, I realized how strong and energetic he was. It was easy then on to believe that he was a robust villager, and could easily fight many men at the same time. And I loved Poonam Sinha (then Komal), she was cute and really glamorous. She even put Mumtaz in the shade. Mumtaz unfortunately had the role of a traditional daughter, sari clad in pastels which do not suit her, outwardly docile, but with the makings of a nag.

At breakfast time, it is BBC Entertainment with new shows that are almost like films, well-shot, wry. Suddenly makes me realize how long I have been watching American sit-coms.

These scattered thoughts, from one screen to another, make up my days for the time being. Meanwhile, real life somewhere else is full of anxieties. My father-in-law has a bypass surgery scheduled on the weekend. Dhanno went from one bout of viral flu to another, and then a throat infection which refuses to go away. It’s going to be more than a fortnight of antibiotics for her.

After all the stress of trying to get into college, she has hardly been able to attend classes, having been ill most of the last 3 weeks. The family doctor diagnoses ‘missing your mother’ as one of her problems.

A few weeks ago, on a whim, Teja and I applied for jobs in another country. A few weeks later, alone in a hotel room, I realize it’s impossible for us to go away from family and friends.

18 thoughts on “bits and pieces of life and the movies”