They walked up to the taxi at the signal. I was ready with my camera. I rolled down the window and said, “I’m going to take a photo of you.” They looked a little confused. 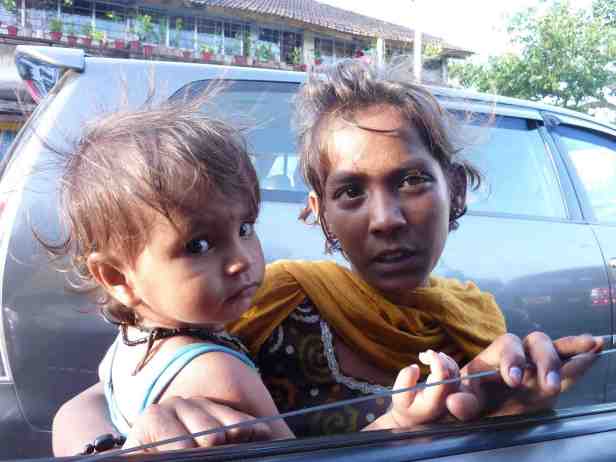 I asked, “Where do you live?” “Here,” she said. “And why are you begging? And making her beg too? What is her name?” They smiled, and posed again. 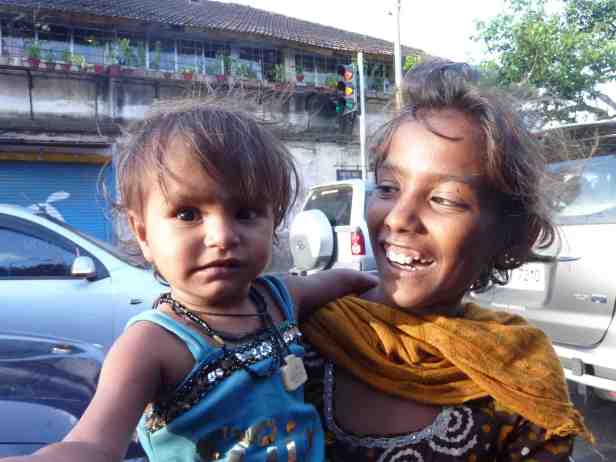 Urmila and Sheela live outside a railway station with their family who makes cane baskets. A lot of street children in Mumbai live with their families. They run out to a traffic signal to beg, to supplement their family’s income. 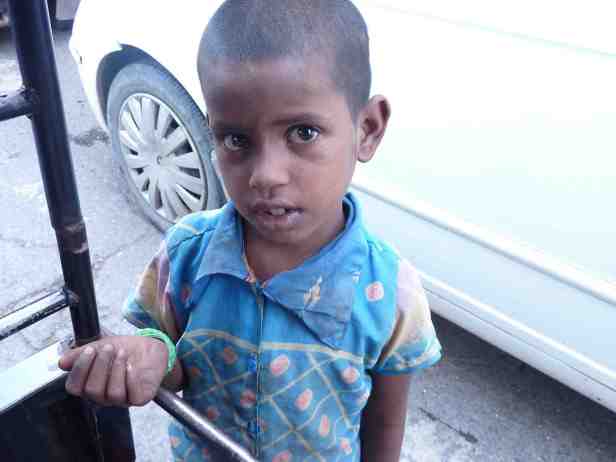 Often the money they earn is used to buy small treats.

Deepa, for instance, whose family sells flowers at another traffic junction near another railway station, loves Chinese food and chocolates. She will never say ‘no’ to an ice-cream ever. 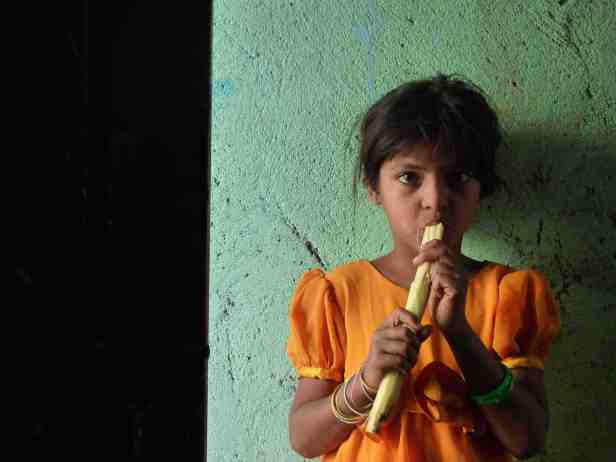 Deepa also does love being on the street, selling flowers with her family and begging. She is still young enough to see it as ‘time-pass’.

Deepa hates going to school, but because of the documentary we worked on, and our repeated inter-actions with her, she thinks she can tolerate school if it means she will win our approval.

The exchange of a few words with Urmila and Sheela made them smile, and forget the money they were asking for. They got lost in the pleasure of being shot.

Even during the rehearsals for ‘Kaphal‘ the children opened up most when they were having fun. Otherwise, most of our efforts to have them communicate and articulate met with little response.

As I inter-act more and more with children, I think, pleasure can be a huge motivator. More than dreary speeches about improving their lives with school.

I love films, I love talking about films. And I am a huge believer in films as a mode of communication, not only via the film itself, but between the members of the audience themselves. What better proof than can there be than the number of friendships forged over film blogs? Or the incredible camaraderie shared by students of the Film Institute over the years, largely based on the shared experience of the films we have watched?

This is the idea behind my community project ‘Streetlight’.  Please go and join up the community on FB, if you have not already.

The need of the hour is a venue with projection facilities for the screenings. It would be good to have an event on October 2, and November 14.

26 thoughts on “on making Urmila and Sheela smile”

Around this frame, there is the noise of crows, traffic, horns, a drill machine, the rumble of a bus. There is the fishy stink that passes through the house with every gust of breeze. Within the frame, there is this. #sea #calm #window
It seems a good day to reassess what MUMU SHELLEY has been up to since its completion in September 2021.
So thrilled to receive this message from one of the loveliest artistic directors, Chris Clark, awesome in his attention to detail and his respect for filmmakers. -
An independent film like Mumu Shelley is usually mostly DIY. It comes together only because there are enough people out there, who love the chaos, the struggle, the madness of making an indie film. Who will pitch in with whatever they have, their time, their talent, their equipment, for little or no money or big visibility, but simply because it is fun to once in a while, work on something that is not governed by the market. Making an indie film is a huge gesture of privilege, the privilege of having a little bit of money to invest, a lot of time on one’s hands, and incredible friends and family.
If you must sneak in a last film at Beyond Borders: A Feminist Film Festival, before it ends tonight, 19 Dec at 11 pm, do watch the short Nepali fiction, SANKUL (The Confusion) by Aashuka Aryal here - https://doculive.blogspot.com/p/confusion.html. The confusion of a newly married girl about her sexuality comes through her silence. The cluttered frames of a small house hint at the suffocation the young woman suddenly realises her life is going to be. Superbly cast.
During the last weekend of Beyond Borders: Feminist Film Festival on until tomorrow, 19 Dec 11 pm, don’t miss the chance to see Ek Tha Gaon, a documentary by Shristi Lakhera here - https://doculive.blogspot.com/p/ek-tha-gaon.html
Watching Pakistani shows is my not-so-guilty pleasure. But as seductive as the language, the sets, the faces might be, the patriarchy and feudalism in real life is not as benign as it might be easy to believe in a ‘drama’. Three ultra-short films from Pakistan are a glimpse into the country that is just like ours, but not ours.
I have always had a soft spot for rebel girls. If you do too, watch Priya Thuvaserry’s CITY GIRLS (Documentary/28’) at Beyond Borders: A Feminist Film Festival here - https://doculive.blogspot.com/p/city-girls.html
David Raphael Israel writes of MUMU SHELLEY - "From the opening scene (in English) of a young woman wearing fancy shoes & speaking into a mobile & apparently about to join a swank party or the like, clearly it's a contemporary story in uppercrust urban India -- but I haven't watched more to find out more, just yet. But I found the scene so striking & interesting & engaging -- the fact of not knowing yet the context is actually part of its interest". And his 280 word review below in the pictures. You can watch the film at Beyond Borders: Feminist Film Festival here - https://doculive.blogspot.com/p/mumu-shelley.html (also link in bio)
My Tweets
BatulMukhtiar@Mastodon