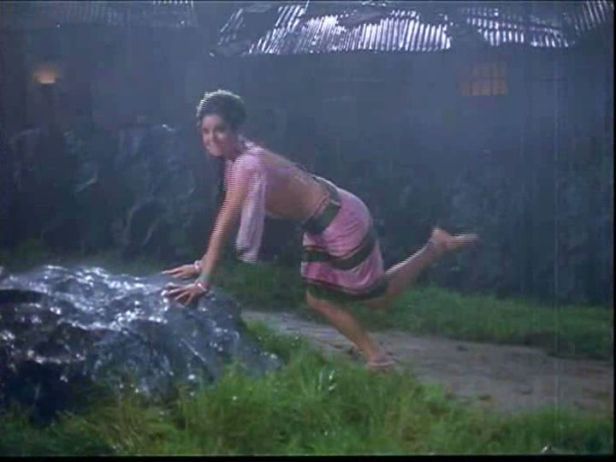 Watching Mumtaz dance on her knees, not once, but in several moves, squatting and then moving up effortlessly, I think how strong she must be. And then again, in the climax, when she is making coy faces at a goon, then he squirms in pain, and the camera goes down to reveal that she has one sandal clad foot on his shoe clad foot, holding him down. She towers over him, and you can believe that she is stronger than him.

There is ample display of her legs through the film. Bhanu Athaiya gives her mini-sarees, through the film, and she has flowers in her bouffant, and she looks quite inappropriately beautiful as a poor girl, Chanda, selling coconuts on the street, running barefoot. 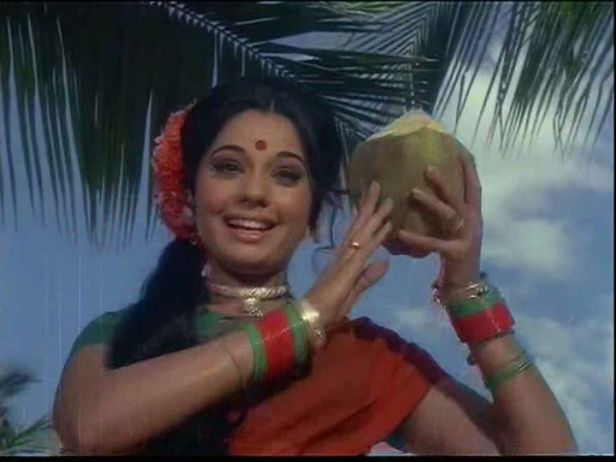 ‘Apna Desh’ (1972, directed by Jambu) is a long-drawn film, almost 3 hours long, about 4 corrupt men (Om Prakash, Madan Puri, Kanhaiyalal and Rajan Haksar) and 1 upright municipal clerk, Akash (Rajesh Khanna). It is full of clichés like the rich men eating tandoori chicken and drinking ‘Scotland whiskey’, while a poor man faints with starvation on the road, long speeches by Akash about the junta, and the rebellion that will come one day.

Most of the film is dull, almost 1 hour goes by with too brief a glimpse of Mumtaz, and it is only towards the end, that Akash and Chanda don blonde wigs, and live in a house with golden statues, and a pond, and lots of female maids dressed in white ballerina dresses, and have an Arab secretary (Jagdeep) and sing, ‘Duniya Mein Logon ko Dhokha Kabhi ho Jaata Hain’. There is also a mysterious boss who visits them, wearing a golden hat. And Akash also has golden shoes.

And there is a secret camera in a square lamp, where everyone poses to tell their dark, dirty secrets.

And of course, it’s all a CBI ruse to catch the villians. And the man with the golden hat is a big CBI officer from Delhi, who thanks Akash for catching the villians, and threatens all corrupt people that as long as there is one idealistic person like Akash in every city and every village, there is hope for the country.

And I am wondering, where the idealistic people of our country are going to get their quota of golden shoes and golden wigs from, and such help in the form of the gorgeous Chanda, shaking her legs, to catch their villians?

There is a lot of Dhokha in the Duniya, for sure.