An author turns 60. The local political party has organized a celebration in his honour. He himself feels like a cheat, he has not written in 2 years, he feels he can never write again, he feels old. He feels defeated by life, by the worry of money, by the anxiety for his children. But he knows he has to write, the money is running out.

On a walk, he sees a marriage procession pass by, and two boys stop beside him, on the side of the road, to let it pass. The boys comment on how rich people squander their money, while people like them struggle to make a living.

Those two boys become his protagonists, Ramesh and Lacchu, and through them, the author Arvind shows us a microcosm of India, just after the Sino-India war in 1962, when the ideals of the freedom movement, the Congress Party and Nehru were feeling tarnished. There was disillusionment, hopelessness, corruption everywhere. And also rebellion. The ideas of socialism, communism, feudalism, individualism struggle with each other. But all of them are tainted with selfish motives, with a human being’s limited understanding of the world through his/her own emotions and own desires. 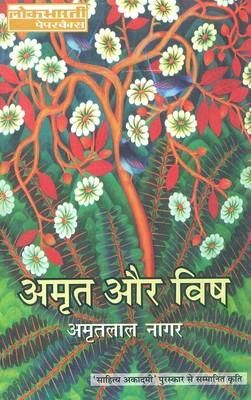 I could not help thinking that there was material enough in the book to make a 5-year long TV serial. India’s reality does not seem to have changed much in these many years, and the book addresses issues that plague us still, it feels contemporary.

There are several characters, their stories, the stories of their fathers and grandfathers, their histories. The book moves from one person to another, describing a world that is interlinked, where the actions of one person impact another, in this life, and also perhaps through lifetimes.

The idea of Karma is what sustains the author in the end. As he finishes the long book, he feels more confident about life, satisfied, beyond his own concerns. But life has not done with him yet; it deals him another blow, perhaps one that will destroy him. But at the end, he realizes that through thick and thin, the only thing one can do is act, do, continue doing. Life is nectar, and life is poison.

I like reading long books, being involved in other lives from another world for an extended period of time. This book was also interesting to me in how the author’s world and his novel connect to each other, in how a small glimpse of 2 boys on the road, leads to the creation of an entire fictional world.

I have been stuck often enough in my writing by my life, the problems that seem to engulf me at the time, by the fear that what I am writing is not good enough. For some time, my writing skills have been overpowered by an ongoing voice in my head, worrying, cribbing, pushing.

I began reading this book, and I began writing the voice in my head. Simple, really.

Gorgeous, gorgeous Liberty Cinema. And fabulous KASHISH Mumbai International Queer Film Festival, India. For a brief moment in time, a space of absolute acceptance and freedom. I am beyond proud in this month of Pride, that MUMU SHELLEY is playing today at KASHISH, Liberty Cinema, 5.45 pm along with many more amazing films. Come, come. KASHISH is on until June 5, 2022. It's also online. #MumuShelley #KASHISH2022  #FlightsForFreedom  #LetsRockTheCity @KASHISHfilmfest @aimanbmukhtiar @pubalisanyal @vivekwhy @iamaasifpathan @anandnmbr @mahak_gupta_ @richa_09_ @ruby_makeupandhair @the_lipstick_gypsy
Around this frame, there is the noise of crows, traffic, horns, a drill machine, the rumble of a bus. There is the fishy stink that passes through the house with every gust of breeze. Within the frame, there is this. #sea #calm #window
It seems a good day to reassess what MUMU SHELLEY has been up to since its completion in September 2021.
So thrilled to receive this message from one of the loveliest artistic directors, Chris Clark, awesome in his attention to detail and his respect for filmmakers. -
An independent film like Mumu Shelley is usually mostly DIY. It comes together only because there are enough people out there, who love the chaos, the struggle, the madness of making an indie film. Who will pitch in with whatever they have, their time, their talent, their equipment, for little or no money or big visibility, but simply because it is fun to once in a while, work on something that is not governed by the market. Making an indie film is a huge gesture of privilege, the privilege of having a little bit of money to invest, a lot of time on one’s hands, and incredible friends and family.
If you must sneak in a last film at Beyond Borders: A Feminist Film Festival, before it ends tonight, 19 Dec at 11 pm, do watch the short Nepali fiction, SANKUL (The Confusion) by Aashuka Aryal here - https://doculive.blogspot.com/p/confusion.html. The confusion of a newly married girl about her sexuality comes through her silence. The cluttered frames of a small house hint at the suffocation the young woman suddenly realises her life is going to be. Superbly cast.
During the last weekend of Beyond Borders: Feminist Film Festival on until tomorrow, 19 Dec 11 pm, don’t miss the chance to see Ek Tha Gaon, a documentary by Shristi Lakhera here - https://doculive.blogspot.com/p/ek-tha-gaon.html
Watching Pakistani shows is my not-so-guilty pleasure. But as seductive as the language, the sets, the faces might be, the patriarchy and feudalism in real life is not as benign as it might be easy to believe in a ‘drama’. Three ultra-short films from Pakistan are a glimpse into the country that is just like ours, but not ours.
I have always had a soft spot for rebel girls. If you do too, watch Priya Thuvaserry’s CITY GIRLS (Documentary/28’) at Beyond Borders: A Feminist Film Festival here - https://doculive.blogspot.com/p/city-girls.html
My Tweets
BatulMukhtiar@Mastodon

Follow banno, dhanno and teja in bumm-bumm-bhole-land on WordPress.com
Join 616 other followers

Join 616 other followers
Follow banno, dhanno and teja in bumm-bumm-bhole-land on WordPress.com