Dhanno comes in to the room and says, “I know her, I know her.” After a moment, she remembers, “She played Rukhsaar’s (Simone Singh) husband’s grandmother in ‘Kabhi Khushi Kabhi Gham’.” I don’t know whether I should credit Dhanno’s memory or Shashikala’s unforgettable face 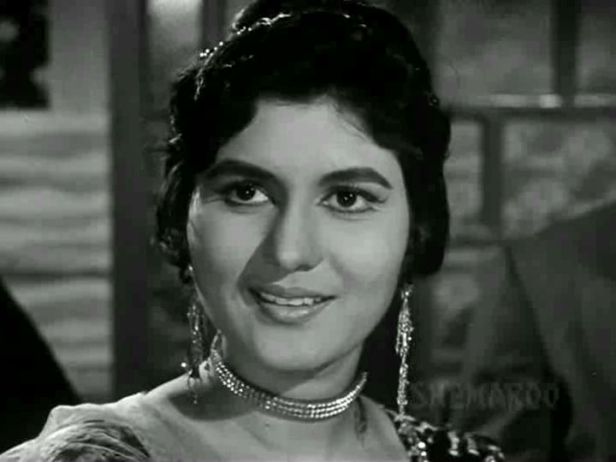 for this connection to the very small scene in the film, or the fact that Dhanno has seen KKKG several times.

In ‘Hariyali Aur Rasta (directed by Vijay Bhatt, 1962) Shashikala plays a wife who lights up her husband’s cigarette and even takes the first step in the suhaag raat scene by switching off the light in a lets-get-down-to-business way. She goes around giving lectures on marriage and child-rearing, and doing ‘social service’ in general, while neglecting her own husband and child. She is a rich, rich woman who has no consideration for those who work for her, and dances with strange men in the club. She is a woman who forgets her dharma which is to serve and to love, and she is called Rita on top of it all. She is meant to die. Those of us well versed with Hindi cinema, can’t help but know that.

Meanwhile there is a father Shivnath (Manmohan Krishna) who is so busy being a ‘trustee’ to his dead friend’s estate, that he forgets to be a father to his own daughter. The boy and girl frolic around the tea estates of Darjeeling from the time they are 8 or 9 to the time they are in their 20s, 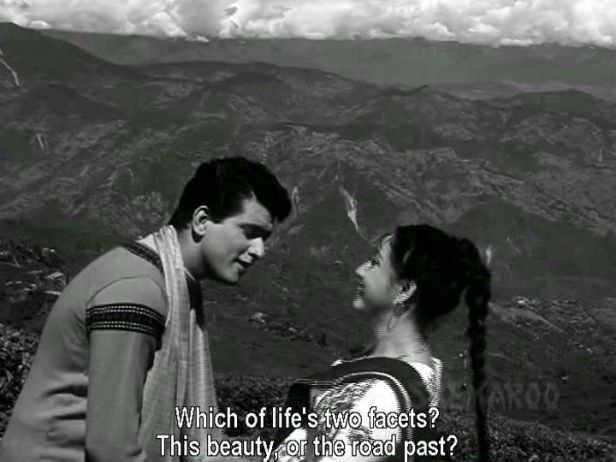 and the father never notices that they are in love. He is also so busy accounting for every penny in the estate to his dead friend’s soul that he conveniently forgets to tell the young people that his dead friend and his dead friend’s dead wife have pledged their little son to another rich man’s little daughter in marriage, when they were children.

These dead souls are quite exacting. Their bodies may have been cremated, but the plans they have made for their son when he was a child, are to be taken as a blueprint for his life. These souls have obviously never read Kahlil Gibran.

For Shivnath, Shobhna’s father and trustee of Shanker’s estate, honour, what people will think, and keeping the good faith of people who have died matter more than the happiness of his daughter or Shanker. He is also not above using the marry-over-my-dead-body card, more shame to him.

In the best tradition of films like these, you have an alcoholic manager, Joseph (Om Prakash) who is also a gossip, other random malicious neighbors and workers, a train crash,

a boatman who saves a girl and also sings about life and love, 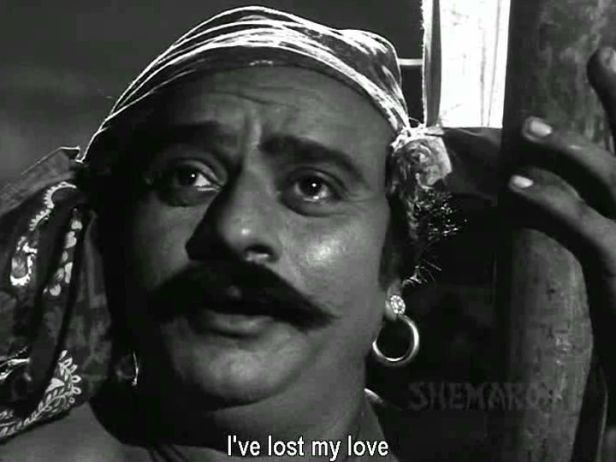 accidents, hospitals and nurses, and a cute, cute child (Moppet Raja, who looks a lot like Daisy Irani). There is a housekeeper, Mary, who dies in the cause of all that is good and honest in the world. And there is Miss Dolly at the club (Helen) with a lot of over-sized moths with limp wings.

Despite the typical set-up of the film, it retains a freshness because the outdoors in Darjeeling are quite well shot in black and white (Cinematographer – Bipin Gajjar). There are some lovely shots of the skies and the tea gardens, and close-ups of Mala Sinha and Manoj Kumar against flowers to match.

And to be fair, there is some exchange of opinions between Shanker and Shivnath, the fact that this idiotic child betrothal is not going to work out well for anyone. Shobhana of course, in the manner of the good woman, is willing to sacrifice her life with a smile.

The relationship between Shobhana (Mala Sinha) and Shanker (Manoj Kumar) feels real, aided by lovely songs (music by Shankar-Jaikishen, lyrics by Shailendra and Hasrat Jaipuri); the childhood friendship is not very icky. The pain that they feel on separating is palpable.

Life has its own quota of separations, like it or not. Some are inevitable, coming from death. Some come from distance, physical or emotional or mental, which yet remains something that happens between 2 people.

We Indians also specialize in a 3rd kind of separation. One imposed by someone else, society, religion, caste, community, family, parents. It would seem absurd enough to laugh at, if it were not so commonly and matter-of-factly practiced in our country. We consider it our birthright to butt into a relationship, and separate 2 people, particularly if they are young and happen to be in love.

We rarely give our relationships time to breathe. And when they do blossom naturally, there are enough people willing to cut them down, under some false claim or pretext.

I have known so many people within my own circle of family and friends, past generations and present, who gave up their own desires to marry someone their parents considered right for them. And I know enough people who married hastily, including myself once, people of their choice at that moment, because of the undue stress that society places on marriage at all costs. I would not be able to judge whether these people are happy or not in their marriages, because we Indians also have a wonderful capacity to adjust, and so we are always happy.

Shanker is obviously not happy,

but luckily, he does not exist in real life, but in a film, where an inconvenient partner can always be bumped off. Bumping off partners in real life, or even divorcing them is incredibly more messy.