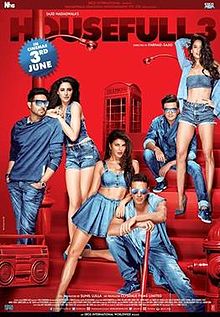 Thus ‘Housefull 3’ (Sajid-Farhad, 2016). Just because it’s going to be a long time before we watch silly films together again – Shy, Dhanno and me.

It was the last day at school. That small, winding lane we took home everyday, from the small gate at the back of the school, was strange. Fancifully. As if we didn’t really know where it led. As if we were going to go down it for the first time. Knowing fully well, we were going down it, perhaps for the last time.

I try not to think about it too much, because if I do, sometimes I just forget to breathe. Instead, we watch silly films. When killing ourselves wouldn’t do, we can make do with killing some brain cells.

And everyone in the film seems to have their brain cells already dead. Dhanno says, “These people have only one solution to everything – switching off the lights. They think cutting off the power supply will solve all their problems.” “People, leave the electricity alone”, she says.

A large man with a large stomach had eased himself into the seat next to Shy, and promptly began to snore, even before the film began. We giggled even though it was mean. He did seem to have the right idea, though. His snores rise above the humdrum nonsense; his stomach undulates gently, amusing us much more than anything on the screen.

We don’t even have popcorn.

4 thoughts on “housefull 3 – who says it’s only words”

Thousands of people. A sign that said ‘even the cynics showed up’
Queuing outside the ladies room. @InfinitiMalad. 12,00,00 square feet. And 4 toilet booths on LG floor. One of which is almost never working.
The buzzing Word to Screen Market 2019 #JioMAMI
Pink and gold sunsets @ Statue of Liberty, NYC
Hall of Biodiversity, NYC
Boating afternoons at Chambers Landing, Central Park, NYC
The Rockefeller at the Empire State Building, NYC
Yellow at Union Square Park, NYC
Gandhi ji at Union Square, NYC
My Tweets
BatulMukhtiar@Mastodon