I’ve been watching ‘Hawas’ (Saawan Kumar Tak, 1974) over 4 months now. It’s just one of those films which are so good, you need to savour the goodness slowly. Don’t gulp down, don’t swallow un-chewed.

There are a lot of shenanigans that go on in the film, around a diamond necklace, worth 50 million rupees, that Kamini (Bindu) owns.

The nitty-gritty of that plot is at best like ‘Chor, Police’ being played by kids. Or rather ‘Chor, Chor’. They are all saying scary things, but in such an unpredictable childish way. ‘Oh, oh, you took my gun, I have another. OK, you are dead now. No, I am not. Oh, I am going to tie you up in our basement.’ The maid appears. ‘Oh, how did you get here? I followed you. Oh, I must go now, Mummy is calling. Hey, can you let me free. Oh, yes, of course. Ha, ha, I gave you a false necklace. OK, tomorrow give me the real one, OK? OK.’

And so on. The coolest bit of the ‘Chor, Chor’ plot is a small box TV, which Anil and Boss use to do a version of Skype on. All our claims of how everything has been discovered and invented in India are true.

The meat of the story is of course that Kamini is a nymphomaniac. ‘Boss’ (Pinchoo Kapoor) says it is a disease. She needs a new man every night. 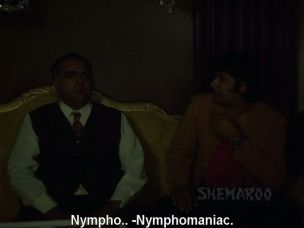 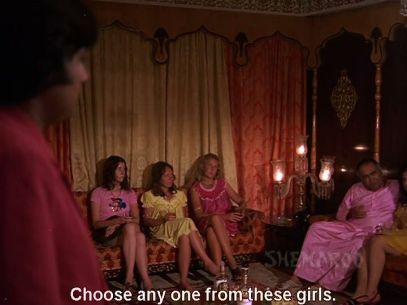 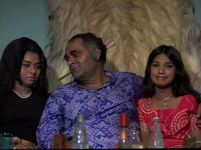 Boss uses his ace man, Anil (Anil Dhawan) – a fairly good looking man (according to Wikipedia) to lure Kamini into his love. Anil himself is willing, because he finds Kamini’s disease very interesting.

If I were to ever teach film acting to students, I could do an entire class on Anil Dhawan. I don’t blame him entirely, but also his directors. The man’s expressions swing crazily from shot to shot, so that you really don’t know what he is supposed to be feeling in that particular scene. He does not know how to stand in frame, he has no idea of how his body is looking in the frame, how he walks. Someone who has come close to him in recent times is Abhishek Bachchan, often clueless about his own presence on screen.

Anyway, Anil seems most at ease when he’s being embraced by a woman, or when he can leer at them. He has his fair share of women in the film – Faryal, Rekha, Neetu Singh and of course, Bindu. 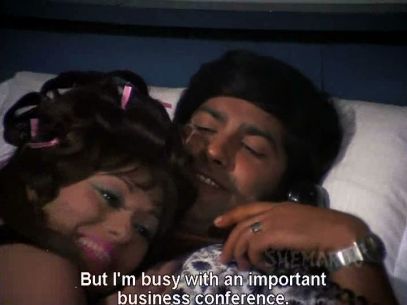 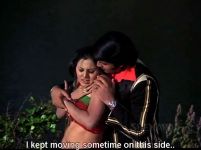 Neetu is his love angle, but he shows her the least amount of interest. He tells her at the beginning of their affair, “How would you have fallen in love with me, if I had not been uncivilized?” But of course, no one is questioning him, because he is the hero, and he is a man.

Kamini’s husband (Pradeep Kumar) is suspicious of her. Of course, no one questions him, an old man marrying a much younger woman, because he is rich, and he is a man. 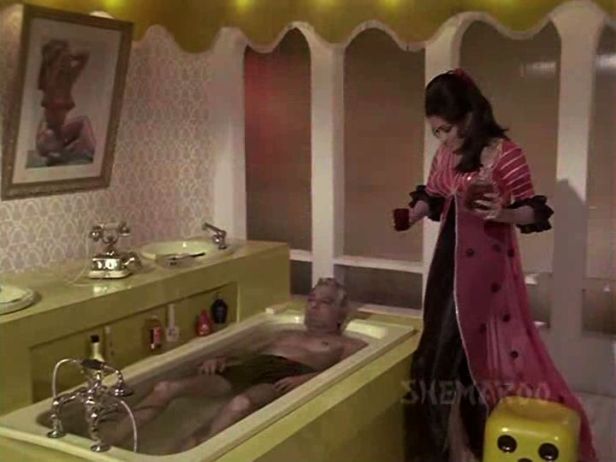 A holy man (Shiv Kumar) talks of purity and then proceeds to take Kamini to bed. He is excused of course, because he is actually after her diamonds, and he is a man.

There are a lot of diamonds in the film, but the most important ones are the ones that shine in Kamini’s eyes when she sees a new man. 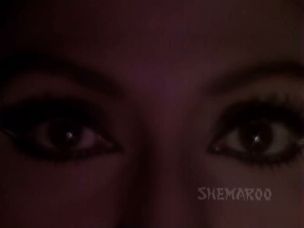 Kamini is the one who comes for all the flak of course. Neetu lectures her on the purity of Indian womanhood, and how Indian women die for their husbands at the end of the film. I forgive Neetu, because she is really, really young in this film (16 at the time) and young girls can sometimes be priggish, because that’s what they have been taught.

When Kamini asks the doctor (Vinod Mehra) why he asks women to remove their clothes when they come for a check-up. He, looking suitably concerned, advises Kamini to lose herself in God, then puts her to sleep fondly. 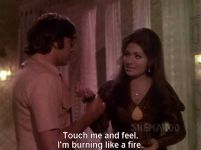 There’s a lot more where this comes from. Mehmood in a small role. Saawan Kumar Tak himself. And even Vidya Sinha, as Anil’s blind sister – because of course, having to take care of her, excuses all his behaviour with other women.

There’s even a Teja, dammit. A yes-man to Kamini.

Even though the film revolves around her character, Bindu won the Filmfare award for Best Supporting Actress for this film. Asha Bhonsle won the Best Female Playback Singer for ‘Yeh Hawas Kya Hain’.

Kamini sings, ‘You will never know what is this lust.’

I have uploaded a clip from the song. Bindu in orange fairy sleeves amongst giant candles. And Anil looking quite smug about himself.

This film fits right in with our notions of culture and morality, because the evil woman kills herself in the end, repenting her lust and the men all get to be smug about a woman, and her sexual desires.

It is this smugness that allows the men in our films and our film industry to dictate what is OK, and what is not. What needs to be censored and what does not. To make the films they do, and pontificate about Indian morality at the same time. Because hey, if you have balloons, that makes it all right.