So she decides to wear yellow at night, on a secret assignment. She takes photos, she gets caught, she invokes Hussain, the grandson of Prophet Mohammad, willing to sacrifice her life for her nation, as did Hussain at Karbala. Her name is Zarina. Agent Zarina. And I’m wondering why the film is not called Agent Zarina, instead of Agent Vinod. I like the name Zarina, it’s my aunt’s name, and it’s pithy and sweet. I’m always trying to sneak in a Zarina into my scripts, and they are always being chucked out by Dhanno.

And here as well, though Zarina is given credit as ‘above all, Rehana Sultan’, because it is she, who puts herself at risk, again and again, to get into the enemy camp, to find their secrets, to escape via a water tank, and rescue Dr. Saxena (Nasir Hussain) on a motorbike, to give up her life 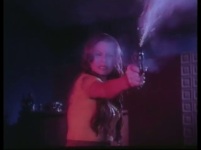 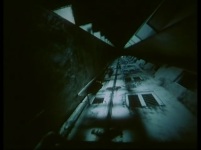 – the hero of the film is Agent Vinod (Mahendra Sandhu) who struts around with a beatific smile on his face, and huge bows propping up his chin, and tight suits gartering him in. 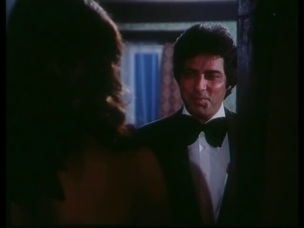 Despite his sartorial choices, there are myriads of girls ready to be wooed by him.

And all she gets is that one yellow T-shirt and black trousers through the film.

It’s not only the girls, Agent Vinod’s seniors also think highly of him. KN Singh says to his men, now I am about to call he who “lomdi ka dimaag rakhta hain, aur sher ka jigar (the brain of a fox, and the courage of a lion). Gracie, call Agent Vinod.”

Agent Vinod’s office is willing to give him all kinds of gadgets to take the fight forward. A GPS system in a locket and ring. A golden pistol “jo aag toh aage se ugalti hain lekin goli peechche se chalti hain” (spouts fire from the front but bullets from the back). A capsule that is a microbomb “jo faulad ko bhi blast kar sakta hain” (that can blast an army). And even magic fingers apparently, that can fire when pointing upwards. 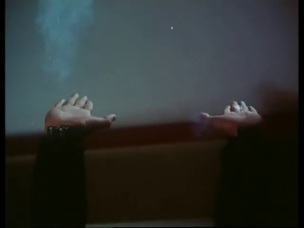 I am wondering why Agent Zarina has been sent off to work with only a camera. Toys only for boys? 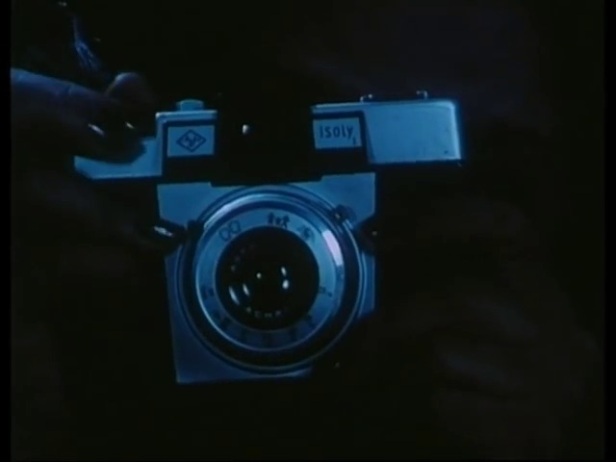 Meanwhile, Anju (Asha Sachdev) has fallen in sweet, innocent love with Agent Vinod, after just one hug, forgetting her kidnapped father Dr. Saxena, as she clings to his arms and parties. While Zarina is getting killed by attempting escape and rescue, Anju stays calm when imprisoned, in firm belief that “iss transmitter ke sahaare Vinod  hum tak zaroor pahunchega” (Vinod will definitely find us via this transmitter). Guess who is the good Indian girl? 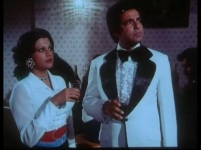 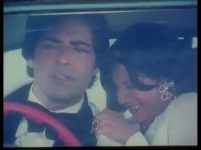 Anju’s father Dr. Saxena is not only an expert scientist, whose formula, made with the help of atomic energy, will “atom bomb, hydrogen bomb, aur iss duniya ke tamam hathiyar ke asar ko beasar kar dein” (neutralize the effect of the atom bomb, the hydrogen bomb and all the weapons in the whole wide world). He is also an expert at clutching his chest, and shouting a feeble “Nahin” (No!!!), when his daughter is brought captive before him. Even in happier days, he is a strange purple color, which looks apt as he is for the most part of the film, tortured and unhappy.

Meanwhile, suave Iftekhar and his men, all dressed in suits, far more sophisticated than Agent Vinod’s, are hell bent on their ‘maksad’ (aim) which is to “apne videshi dosto ko khush rakhna aur unka maksad is mulk ko barbaad o tabaah karna” (to keep our foreign friends happy, and their aim is to destroy this country).

Out of nowhere, Jagdeep in a magician’s top hat decides to join Vinod in his rambling quest for the villians. But he spends a lot of his time hanging from the 25th floor of a building across Marine Drive from a phone extension, then flying over the city, dangling from a bunch of balloons. 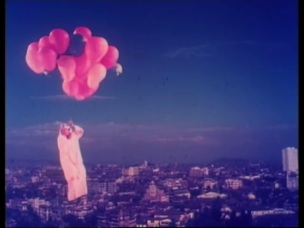 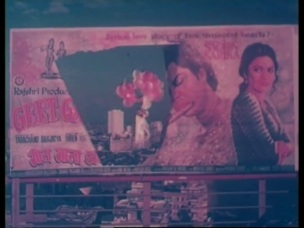 The film is mainly a showcase for Veeru Devgan who shows off all the stunts in his repertoire – people flying off buildings, motorbike chases, somersaults in the air, flying motorbikes, flying cars, explosions galore. 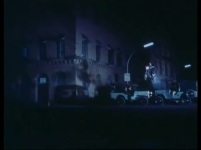 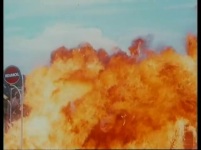 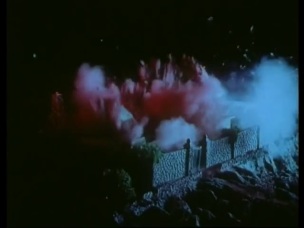 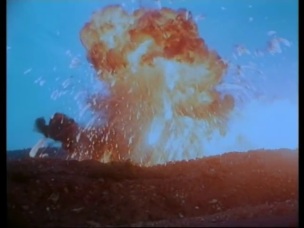 JD (Pinchoo Kapoor), the boss man’s house has a fake lion and guns on the wall.  But this is only his ‘respectable man’ facade.

His den is crammed with more toys than Agent Vinod has – a robot that slaps people, laser barriers, man sized cages, pits, automatic manacles that pin your wrists to the chair, arrow heads that descend from ceilings, gas chambers, water tanks that will flood rooms. 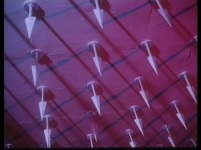 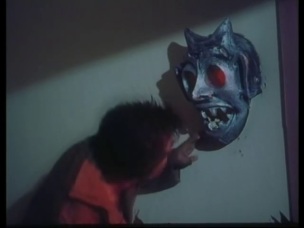 He also has a room with multiple mirrors that allows his head to disassociate from his body. 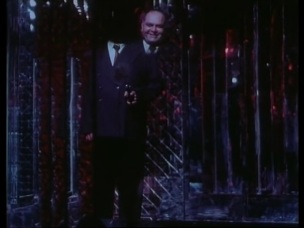 He also has a “duniya ka sab se khatarnaak time bomb, jo dus baje apna rang dikhaayega” (the most dangerous time bomb in the world, that will show its true colors at 10 o’clock). But just to make sure no one escapes, he has also rigged “Yeh gas 3 minute mein sab ko sula dega. Iss ke ilaawa main ne iss building ko dynamite lagaa diya hain jo 5 minute mein isse khandhar mein tabdeel kar dega.” (This gas which will put everyone to sleep in 3 minutes. I have also put dynamite in this building that will turn it into ruins within 5 minutes). He is taking no chances. There is even a large mouth that opens and shuts, from which you can overlook proceedings. 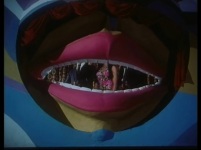 I am thinking he also has huge generators somewhere, because in case of power failure, all his toys would be pretty useless, and just imagine being shut inside that mouth.

The henchmen have their own toys, scorpion walkie-talkies, that work like mobiles, distance and range be damned. And their suits. And scorpion tattoos on their fingers. The scorpion insignia is on the wall of the den, casting scorpion shadows. These men have nothing to hide.

Everyone speaks in chaste Urdu/Hindustani. Agent Vinod also spouts ‘shayari’, (poems) at every turn, of the simple, much-appealing, back-of-the-truck variety.

In the contest between Agent Vinod and Agent Zarina, Agent Vinod wins, because she has only sincerity and hard work on her side, and he has toys, girls, more girls, disguises and cheap poetry on his. 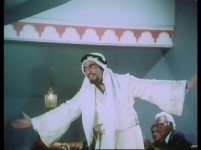 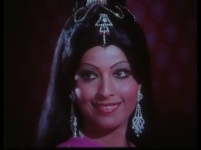 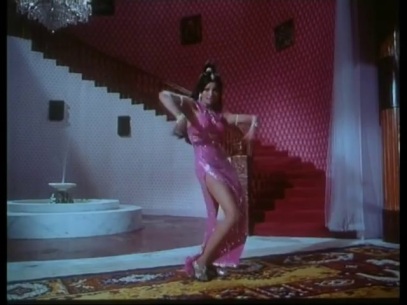 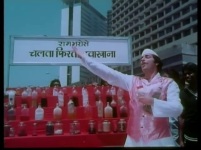 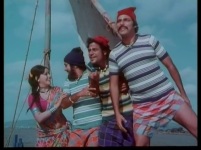 He even has Vat 69 and a pink dressing gown.

Ah well, that’s how the world is.

She does get to die in dissolves though. 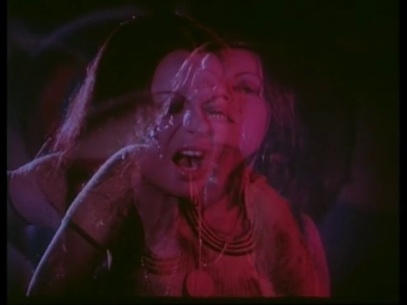 And Iftekhar dies and falls at her feet, which is a victory of sorts, even if she is dead herself. 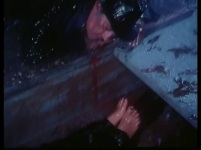 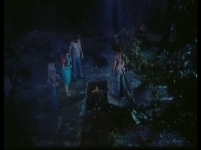